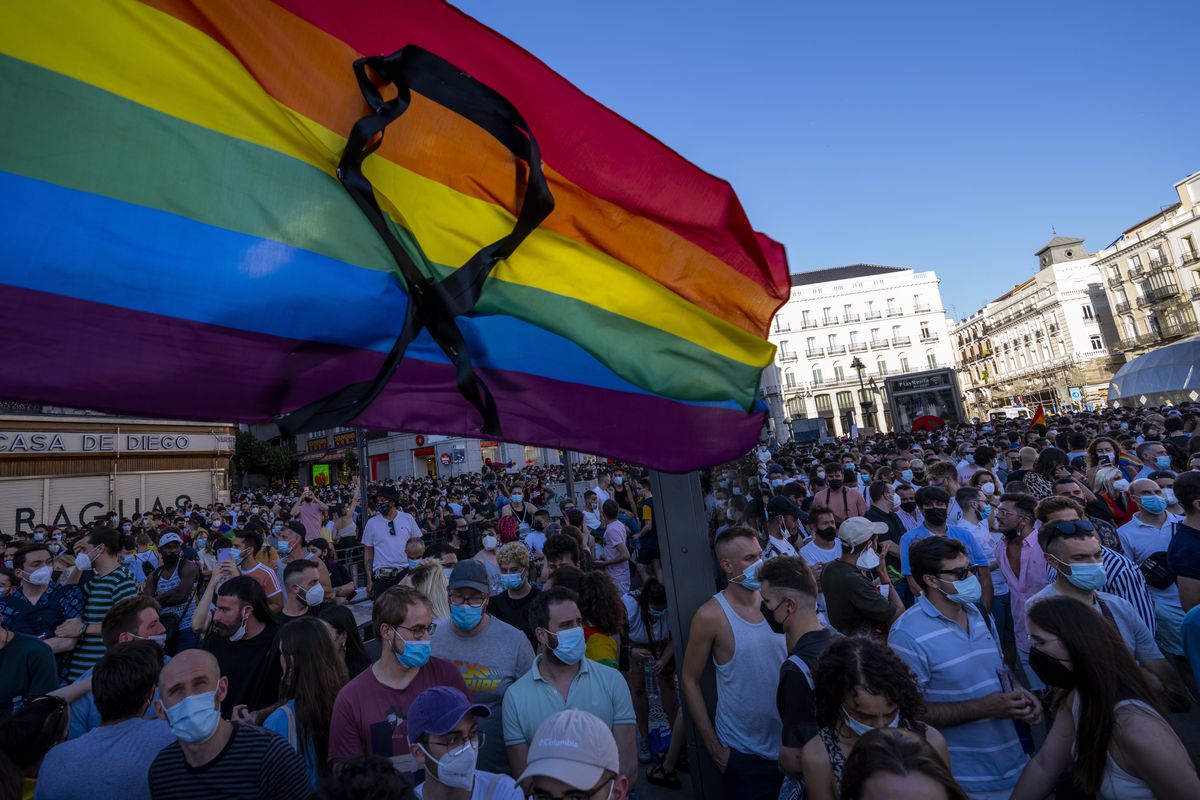 Just before Samuel Luiz was brutally beaten to death on July 3, he and his friend Lina made a video call to Vanessa GonzÃ¡lez. The time was 2.45am and they were on the seaside promenade of A CoruÃ±a, a city in Spain’s northwestern region of Galicia. The friends told GonzÃ¡lez that they were having a good time and that she had to join them the next time they went out. She was still on the line when Luiz was attacked, and listened as Lina described in disjointed snatches what was happening – from the first punch to when he was brutally kicked to death by up to seven people.

â€œI can’t explain it, no one can explain it,â€ GonzÃ¡lez told EL PAÃS on Thursday, the day after giving her statement to police. â€œHe was very thin, he didn’t trouble anyone. He had never been assaulted by anyone. I only heard [him saying] ‘please, please,’ but they kept going and going and going. â€

Police are still investigating the killing of the 24-year-old nurse – three people have so far been sent to prison and another two are in a juvenile center. Officers believe the attack was triggered by a misunderstanding: one of Luiz’s assailants believed that he was recording him when he was on the video call. GonzÃ¡lez, however, is convinced that the murder was motivated by homophobia – given Luiz was gay – and LGBTQ + groups across Spain agree.

Indeed, Luiz has become a symbol of the LGBTQ + movement’s fight for basic rights – such as the right to walk home safely without being assaulted, harassed or insulted. According to several leaders of these associations, his murder marks a before and after moment for the LGBTQ + movement. It is a trigger in the same way the fatal shooting of Trayvon Martin in the United States sparked the Black Lives Matter movement, or the murder of Ana Orantes – who was burned alive by her ex-husband just days after denouncing his abuse on a television program – provoked a national reckoning about gender violence in Spain.

â€œThis has shaken something up, it has been a kind of collective wakeup call in which very young people are saying that they are not going to accept any more, that they are not going to tolerate another assault,â€ says JosÃ© MarÃ­a NÃºÃ±ez, the president of the NGO TriÃ¡ngulo Foundation, which defends the rights of LGBTQ + people. â€œIt has been a kind of catharsis for our world. There is no going back. This, as I see it, is the straw that broke the camel’s back. â€

Eugeni RodrÃ­guez, the president of the Observatory against Homophobia in Catalonia, agrees: â€œThere are youngsters who go out in packs like in the case of Samuel. That’s why the case of this boy has meant a change in paradigm, a before and after. â€

LGBTQ + groups in Galicia have been the first to feel the effect of this shockwave. Xandre Garrido, 29, the coordinator of AVANTE LGBTI + in Galicia, says he knew at once that the brutal killing had changed something. Suddenly his Twitter feed was filled with messages from LGBTQ + people denouncing the violence they had experienced.

One tweet read: â€œI want to say sorry for not raising my voice at the time. I was a coward and I stayed quiet out of fear. Unfortunately, I was a victim of a homophobic assault. I was surrounded by five people, three guys and two girls. They came up behind me, they pushed me, surrounded me and the guys were encouraged by the girls to punch me twice in the face. They said: ‘Mess up the face of that fag.’ â€

Another victim shared: â€œWhen I was beaten up for holding the hand of my ex, the police told me that holding hands was being provocative. And in the ambulance (I was in shock, I couldn’t even speak with my face covered in blood), the man told me that I should sign up for a personal-defense course because it was my fault. â€

Some of the messages were about assaults that happened in the past, others about more recent cases. But what is significant according to Garrido is that so many people have gone public. â€œThe murder of Samuel has been very traumatic for the whole collective. It has broken our sense of security. It doesn’t necessarily mean a step backwards, but it could be. That depends on us, and when I say us, I mean all of society, â€he says.

The latest statistics from the Interior Ministry show that hate crimes and incidents recorded by the police and the Civil Guard increased 6.8% in 2019, with respect to the year before. A total of 1,707 cases were reported, and of these, 596 were for ideological reasons, 515 for xenophobia and 278 for homophobia, which was a similar percentage to that of 2018.

TriÃ¡ngulo Foundation has more recent data but it is no less clear. In 2018, 15 cases of homophobic assaults were processed. This number rose to 22 in 2019, 29 in 2020 and as of June 30 of this year, there have been 28. â€œThe problem is not only that assaults are rising,â€ says RaÃºl GonzÃ¡lez, the vice president of the association. â€œIt’s that they are more serious. This minority sector which is against us, around 5% to 10% of society, has been emboldened by [far-right political group] Vox. â€

He explains: â€œBefore it was politically incorrect to insult us. It was embarrassing for them. Not any more. You are debating something, the problem in Catalonia [where an independence movement has deeply divided the region] for instance, on social media, and suddenly someone says ‘shut up fag.’ â€

Silvia Tostada, 39, the president of the TriÃ¡ngulo Foundation in Extremadura, agrees that Vox is fueling homophobia in the country. â€œThanks to this far-right party, in every primary school, in every high school there is always a guy or a girl who has the Spanish flag on a bracelet, a certain attitude and who always questions you with a repeated discourse, learned from memory. That didn’t happen before, â€she says.

Vox, for example, has sought to make it more difficult for students to receive extracurricular courses aimed at fighting discrimination against LGBTQ + people – education that activists say is key.

â€œIt’s vital that education on diversity be part of the program of core subjects, and not at the discretion of teachers’ will,â€ says Carmen AdÃ¡n, a professor of philosophy in Vigo. â€œIt is very important that students become skilled in mathematics and languages. But it is more important that they acquire moral skills. â€

The Spanish Cabinet approved on June 29 a bill that seeks to extend and cement the rights of the LGBTQ + community. The bill would make it mandatory to discuss sexual diversity in class and fine people up to â‚¬ 2,000 for making homophobic insults. This would increase to â‚¬ 10,000 for insults that are not withdrawn from social media, Pilar Ãlvarez postponements. But there is still a long way to go before it becomes a law.

Arantxa Miranda is a municipal police officer in Madrid and a member of a unit specialized in tackling homophobic and racist attacks. She explains that while hate is considered an aggravating factor and can lead to longer prison sentences in the case of murder, when it comes to less-serious incidents, such as verbal harassment, the punishment varies from region to region. While in Madrid and Catalonia, culprits are fined, this is not the case in Galicia. â€œIt is important for these offenses to carry fines to eradicate the problem from the state, so that nothing is tolerated,â€ says Miranda, who is also a spokesperson for the Gay, Lesbian, Bisexual and Trans Federation (FELGBTB). The bill, if approved, would introduce a uniform system of fines for all of Spain.

With respect to Luiz’s killing, Miranda has no doubt that it was a hate crime. â€œIt is an evident case,â€ she says. â€œThe cruelty shown to the victim is symptomatic of this criminal point of view. The argument is set off by something minor, a video recording, something that should not have gone any further. But Samuel’s killers, in my opinion, don’t see Samuel as a person. They see someone gay. They objectify him and that’s why they attack him. â€

In the meantime, TriÃ¡ngulo Foundation has been inundated with messages from people wanting to get involved with the fight to defend LGBTQ + rights. One reads: â€œHello, after what happened to Samuel I want to do something to help the association.â€ Another: â€œI am moving to Salamanca and want to be an activist. Now more than ever. What can I do? â€