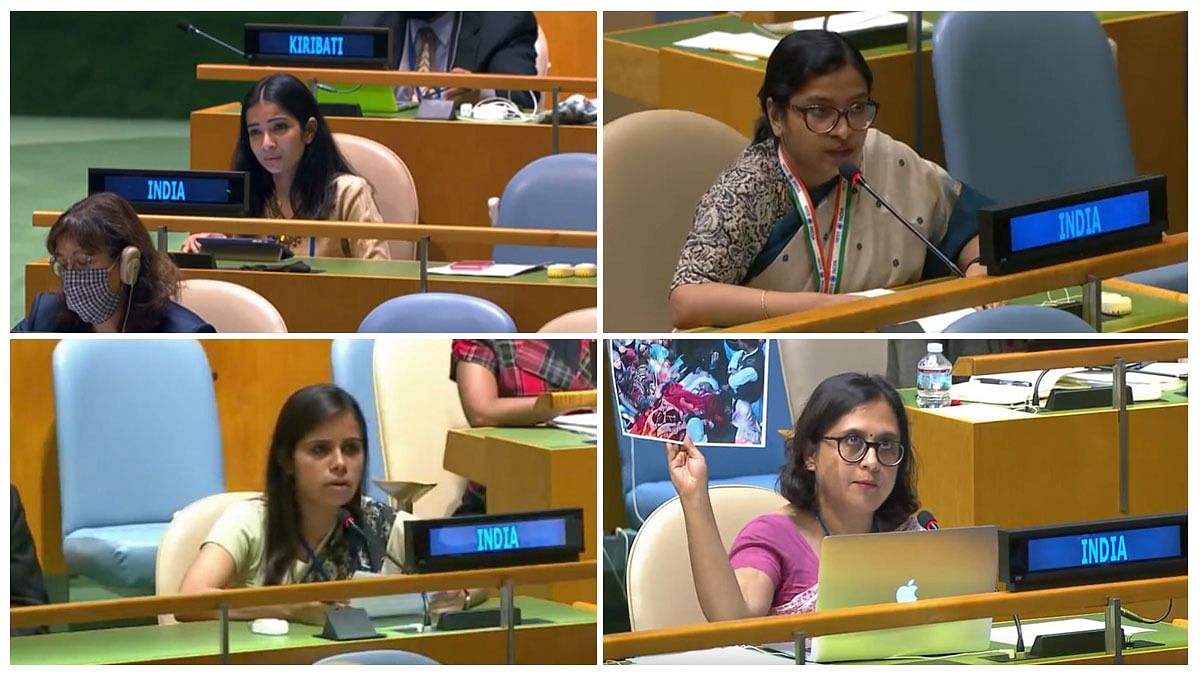 
New Delhi: Hours before Prime Minister Narendra Modi addresses the 76th session of the United Nations General Assembly (UNGA) in New York on Saturday, in which he spoke about terrorism and extremism, Sneha Dubey India’s first secretary at the UN made headlines for delivering a fiery speech in response to Pakistan.

â€œPakistan holds the despicable record of hosting the highest number of terrorists banned by the United Nations Security Council. Osama bin Laden has found refuge in Pakistan. Even today Pakistani leaders glorify him as a “martyr” “, Dubey noted to UNGA, adding that Islamabad is an “arsonist” disguising himself as a “fireman”.

The 2012 batch IFS officer exercised India’s right of reply to Pakistani Prime Minister Imran Khan’s statements to the UNGA. The right of reply is a UN procedure which occurs after the day’s events or meetings, in which a delegation has the right to defend itself against public criticism in the same place.

Several social media users praised Dubey’s “Answer worthy of the name”, while some called it a “lioness”.

Over the past five years, three other young Indian female diplomats, Eenam Gambhir, Vidisha Maitra and Paulomi Tripathi, have also denounced Islamabad over terrorism and the Kashmir issue at the UN.

ThePrint traces the journey of these four women and the speeches they gave at the UN that caught everyone’s attention.

Born and raised in Goa, Dubey received a BA from Fergusson College, Pune and an MA in Geography from Jawaharlal Nehru University (JNU). She then pursued a master’s degree in philosophy at the School of International Studies at JNU.

â€œSince I was 12, I wanted to be part of the Indian foreign service,â€ she said in a 2013 maintenance with a magazine published by the UPSC Chanakya IAS Academy training center.

In the interview, she also mentioned that no one in her family had IFS training, and she passed her UPSC exam in 2011 on the first try.

After graduating from the Class of 2012, she worked at the Ministry of Foreign Affairs as an Under-Secretary and later served as Third Secretary at the Embassy of India in Madrid, Spain.

In September 2019, Maitra made headlines for his dazzling response to Imran Khan after warning of a ‘bloodbath’ in Jammu and Kashmir at UNGA. While serving as First Secretary of India’s Permanent Mission to the UN, Maitra said: â€œCan the Prime Minister of Pakistan confirm that he is home to 130 UN-designated terrorists and 25 listed terrorist entities? by the UN to date?

She further asked: “Would Prime Minister Imran Khan deny New York City that he was an open supporter of Osama bin Laden?”

Shiv Sena leader Priyanka Chaturvedi had greeted the diplomat for “having denied all the lies uttered by the Pakistani Prime Minister”.

Maitra is an IFS agent from the 2009 batch, who won the gold medal for “best training officer” for his performance in training. She was previously Undersecretary (Policy, Planning and Research) at the Ministry of Foreign Affairs.

This was a crucial role as India prepared to serve on the UN Security Council as a non-permanent member for a two-year term starting in January 2021.

In September 2017, Tripathi turned heads by giving a to respond to former Pakistani UN representative Maleeha Lodhi, a day after Lodhi showed UNGA a photograph of a woman from Gaza as “a victim of gunshot wounds in Kashmir”.

This is a real photo, of Lt Ummer Fayaz, a young officer from J&K. He was brutally tortured and killed by terrorists backed by Pak: India #UNGA pic.twitter.com/i2CFVUplvj

A 2007– Batch IFS Officer, Tripathi recently held the position of Assistant Secretary in the Foreign Service Personnel and Management Division of the Ministry of Foreign Affairs. She was also to advise at the Permanent Mission of India to the UN.

In September 2016, Gambhir made waves for calling former Pakistani Prime Minister Nawaz Sharif’s speech at the UNGA a â€œlong tiradeâ€ on the situation in Kashmir.

â€œIn its short history, Pakistan has become a geography synonymous with terror. The quest for a land of pure has in fact produced â€œthe land of pure terrorâ€. Pakistan is now a “terrorist”, “she said. noted.

Gambhir, an IFS officer in the 2005 class, is currently Director of the Multilateral Economic Relations Division at the Ministry of Foreign Affairs, dealing with G-20 issues, BRICS and G-7.

She previously served as to advise to the Permanent Mission of India to the UN and senior advisor on peace and security issues at the office of the president of the UNGA. She also worked in Indian embassies in Mexico and Argentina.

But the news media are in a crisis of their own. There have been brutal layoffs and pay cuts. The best of journalism is shrinking, giving in to crass spectacle in prime time.

ThePrint has the best young reporters, columnists and editors working there. To maintain journalism of this quality, it takes smart, thoughtful people like you to pay the price. Whether you live in India or abroad, you can do it here.